Géodunes is a French environmental consulting firm based on the Côte d'Opale in Dunkirk. It specializes in coastal development and geomorphology and is currently in charge of analyzing the effectiveness of sand replenishment activities at the Alliés Dike in Dunkirk. The dike is part of an important flood prevention program which protects the inland population. To measure the conditions of the beach along the dike, the company used a Trimble® R8s GNSS and Trimble Catalyst™ DA2 GNSS receiver and its pole to collect field data with centimeter precision.

“Géodunes’ services range from land acquisition (topography, hydrodynamics, sedimentology) to project management assistance to support coastal protection or seafront works,” says Adrien Cartier, founding director of Géodunes, and doctor of coastal geomorphology specializing in coastal sedimentary hydrodynamics. The company operates on the coast of the Hauts-de-France region, bordered to the west by the English Channel for more than 120 kilometers and to the north by the North Sea for 45 kilometers, on the edge of which is the city of Dunkirk, France’s third largest port in terms of traffic.

A Beach Under High Surveillance

The Alliés Dike, owned by the French State, was built in 1876 and is approximately 1 km long. The containment system protects a territory of more than 40,000 inhabitants against the risk of marine submersion. A rupture of the dike would result in widespread destruction, such as previously experienced in 1949 and 1953. 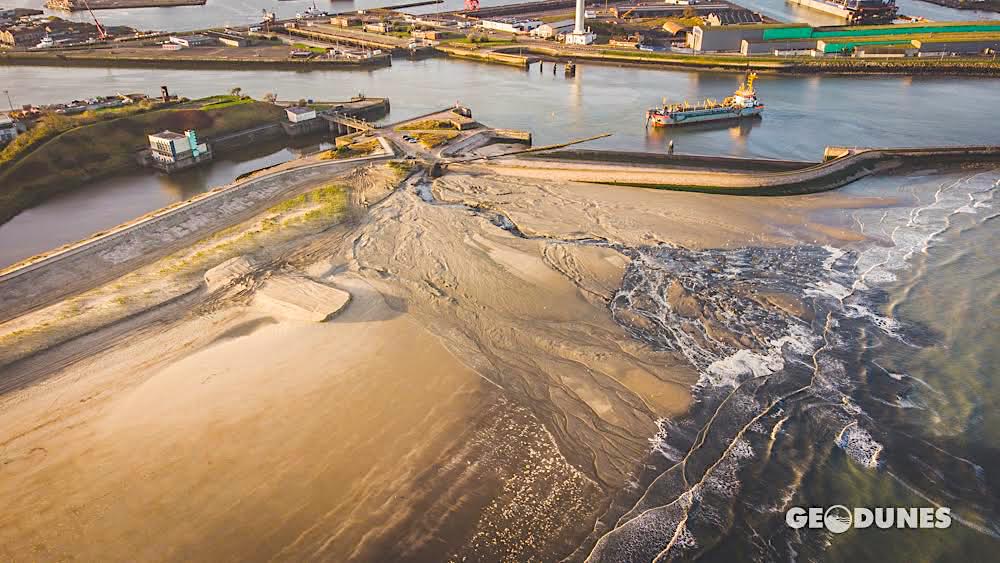 View of the dike separating the sea from the Dunkirk outlet canal, ensuring drainage of the hinterland.

Since storm Xynthia hit the French coast in February 2010, causing severe flooding and loss of life and property, the French State has sought to strengthen and accelerate the marine flood risk prevention policy. The goal is to implement lasting measures able to prevent the failure of dikes. To protect the Alliés Dike, a first massive sand nourishment of 1.5 million cubic meters was carried out in 2013–2014 at the foot of the dike to buffer the effect of swells likely to damage it. This raised the level of the beach by about 7 meters.

To limit the loss of sand, marram grass was also planted. The presence of these plants, which are particularly fond of sandy soils, leads to a decrease in the speed of the wind and thus enables ever more effective trapping of sediment, resulting in the deposition of sand transported in the air. As the sand progressively settles, the marram grass continues to grow, creating a natural windbreak. 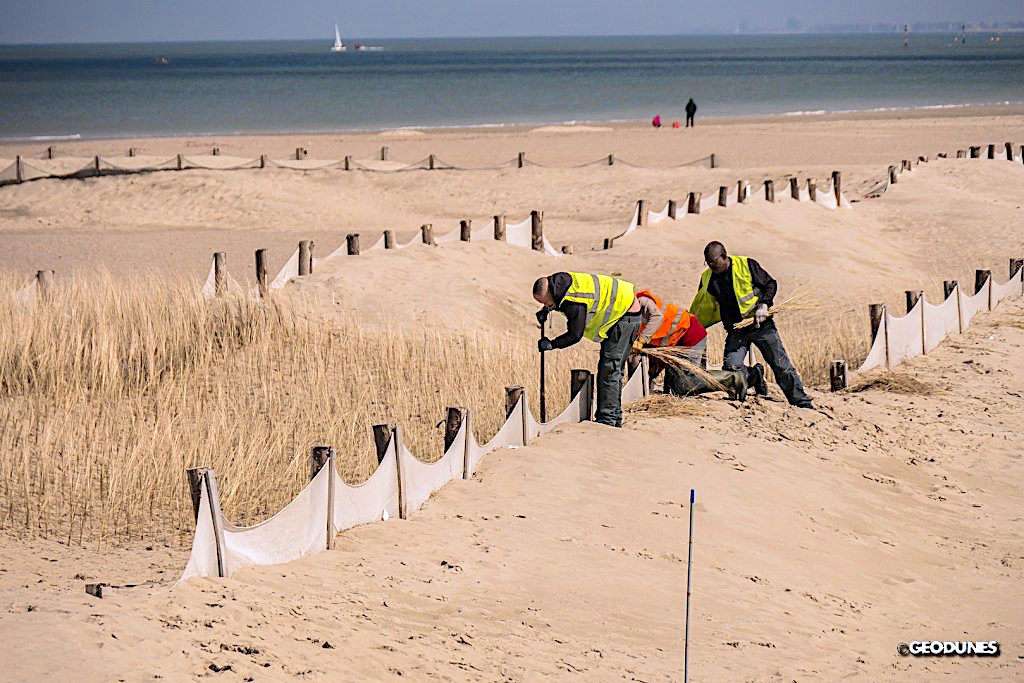 Planting marram grass on the beach.

Despite all these measures, with part of the initial sand replenishment drifting east or returning to the sea, maintenance replenishments have been carried out every year since 2019 to rebuild a sandy zone acting as a protective barrier. These maintenance volumes, estimated at 30,000 cubic meters every year, make the reinforcement of the Alliés Dike a high-visibility test case for sustainable management of the coastline and the subject of meticulous shared studies.

As part of a biannual monitoring mission managed since 2014 by municipalities in the Urban Community of Dunkirk (CUD), Géodunes performed geomorphological monitoring of the evolution of the Alliés Dike beach in April and June 2022, over a total area of approximately 6 square kilometers. The team used a Trimble R8s GNSS, a Trimble Catalyst DA2 GNSS receiver and its pole, and a drone performing a photogrammetry overflight. 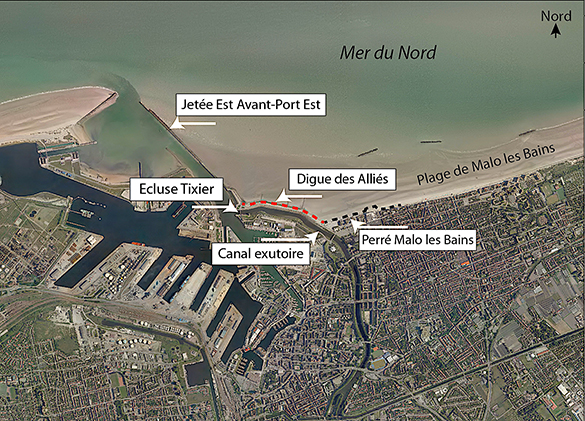 “We collected the necessary data over two days during the period of high tides and, of course, at low tide,” explains Cartier. “As I had to hire a person to help me with the acquisition in the field, it was necessary to acquire a solution, in addition to the R8s, that would be both fast and inexpensive, requirements which the Catalyst DA2 fully met.”

“The digital elevation models we produced with the Catalyst DA2 and all our maps are used to illustrate the dynamics of the beach nourishment and to understand its evolution in order to better manage it,” says Cartier. “It is also a regulatory follow-up to decide on the sand replenishment program’s effectiveness.”

To obtain better working comfort, Cartier mounted the Catalyst DA2 and its pole on a monostick-type roulette wheel (a system he had set up for the first time during his university years) while criss-crossing the beach at Dunkirk with a GNSS receiver.

“We used to proceed in a ‘stop and go’ mode, stopping each time we took a point,” Cartier says. “Using the wheel, as I still do today, I simply put the receiver in automatic acquisition mode to operate while walking, without worrying about what the terminal displays. This makes it possible to increase the acquisition of points while reducing the acquisition time required. ”

To follow the coastline at the foot of the dunes and map 6 km of coastline in one hour, Cartier also mounted the Catalyst DA2 on a "fat bike" equipped with big wheels, while, on other projects, he has installed it aboard a quad. 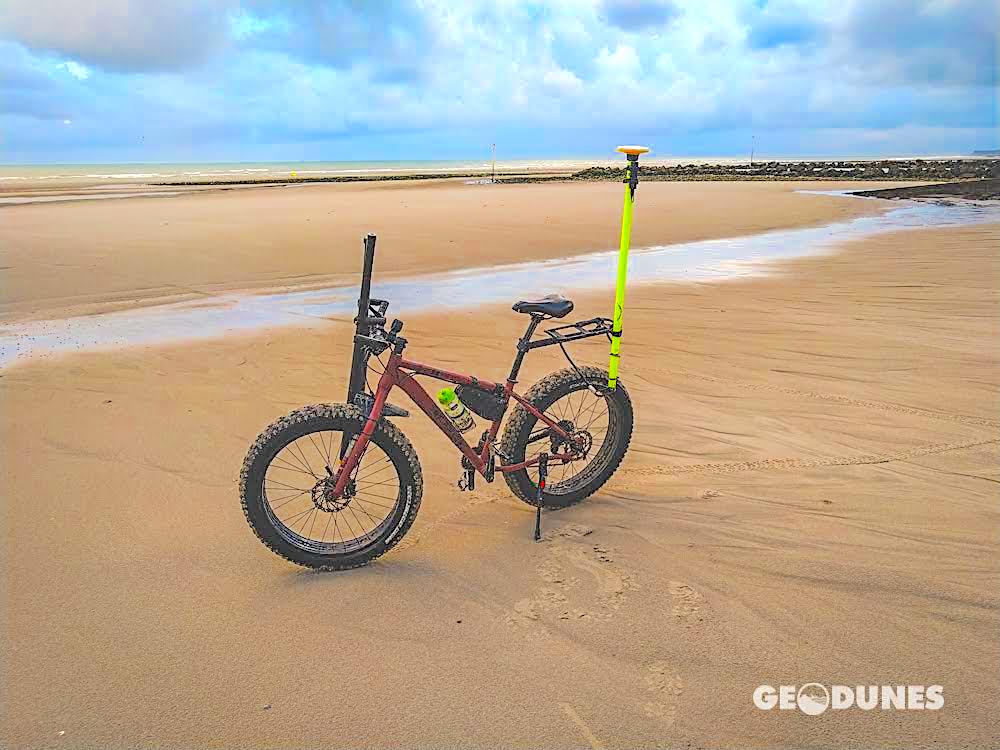 The Trimble Catalyst DA2 mounted on a fat bike.

The Trimble Catalyst DA2 provided numerous benefits to the coastline monitoring project, such as high accuracy, good ergonomics, ease of use and compatibility with the necessary software solutions.

“The Trimble GNSS allowed us to work in a more flexible way than other methods would have, and other equipment would certainly have been more expensive,” says Cartier. “Apart from the intrinsic quality of this equipment and its compactness, I particularly appreciated its price and the various subscription options offered, including the one working on an hourly basis, which fully suited my use of the antenna as backup equipment.”

Cartier concluded, “I would also mention that you don't need a field notebook but only a rugged smartphone, with the possibility of kinematic acquisition, and the remote training provided by my Trimble distributor D3E Geospatial proved useful, in particular the theoretical part devoted to GNSS.”

"Besides the intrinsic quality of the Trimble Catalyst DA2, I particularly appreciated its price and the various subscription options offered."