Conventional surveying for high-speed roadways, railways and active airports can challenge crews to acquire precise measurements quickly while staying safe. One German company has adopted 3D mobile mapping technology to help bring speed, safety and optimal data capture to its infrastructure projects. The move is helping redefine the business of road and railway projects and steadily driving them toward new opportunities.

Strabag AG is one of the biggest construction companies in Europe and the leader in infrastructure construction in Germany. With a reputation for delivering complicated transport projects on time and on budget, the company recognized its traditional surveying technology was challenging crews to keep up with the breakneck pace of their design/build assignments.

In late 2018, after testing a few options, Strabag purchased the Trimble MX9 mobile mapping solution to bring efficiency, safety and precision to its existing work. The company believed it could also create new business through demonstrating the technology’s capabilities.

One of its first tests was a pilot project for the Northern Bavaria Motorway Directorate (NBMD)’s renovation of the A93 highway near Regensburg. Strabag’s task was to scan and collect imagery of a 20 km section of the two-lane highway and create a DTM with an absolute accuracy of 1.5 cm horizontal and 2 cm vertical. They would also pair the 3D mapping data with UAS imagery that captured features 200 m either side of the highway.

To achieve the required data specifications, a field team used a Trimble SX10 scanning total station to survey and mark 120 ground control points (GCPs) to provide control for the mobile mapping. With the MX9 mounted on their vehicle, the team traveled the highway at 80 km/hr. They scanned structural features such as break lines, pavement edge lines, road and building signs and road markings—any feature within 50 m of the road. They also captured panoramic and multi-angle photos every 5 m. In two hours, they collected a point cloud of the entire 20 km section. 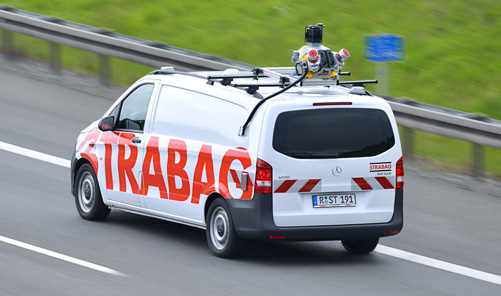 Back in the office, a team used Trimble Business Center (TBC) software to integrate the GCPs with the scanning points to process the point cloud. They extracted a host of features such as break lines, pavement edge lines, markings and crash barriers to produce a vectorized dataset. After creating the final centimeter-accurate DTM of the A93 highway, they delivered the vector dataset, UAS images and DTM to the NBMD.

In addition to pilot projects, Strabag has used the MX9 on numerous other transport infrastructure projects both in and outside of Germany.

Austrian transport company Graz-Köflacher Bahn-und Busbetrieb (GKB) commissioned Strabag to use the MX9 to capture a night scan and measure a 51-km-long stretch of railway for a planned electrification of its route network in Styria, Austria. Mounted on a special locomotive, the MX9 scanned all visible features, including those overhead—detail that will help inform the planning and design of the new electrical infrastructure. The MX9 has enabled Strabag to successfully venture into new territories such as the €455-million Terminal 1 expansion project at Munich Airport. Strabag was commissioned to provide a detailed as-found map of the existing space and its structures before demolition. A team set out a network of GCPs across the 95,000 m2 concrete apron and measured them with the Trimble SX10. Then the team scanned the whole area of interest with the MX9, capturing all the buildings, markings, lights, signage and concrete seams in one hour. The data was processed in TBC to produce the 3D model of the site, which clearly showed the real-world view of the terminal’s infrastructure, from the smallest concrete joint feature to the tallest light pole.

“Surveying such a large site with conventional methods would have required several days of work and added cost,” said Thomas Gröninger, Strabag’s division manager of digitalization. “With mobile mapping, we collected all the needed field data in one hour.”