Paul van der Linden has been a construction contractor for over three decades but had been seeking new areas of speciality. He started Paul3D, a successful business providing camera-based 3D virtual tour service for architectural clients. Many of these clients, however, wanted more precise representation for historical buildings for repair and restoration. Adding high-precision laser scanning to his services was the logical progression. Shedding Light On A Historical Village

Franeker is one of eleven historic towns in the northwest province of Friesland. Founded in the year 800, Franeker is home to many iconic buildings; cathedrals, university and civic buildings, and a famed planetarium built in the 1800s. One of Van der Linden's clients, Provrex, needed to create a full 3D model of the historic center of Franeker; the model would be used for the design of new lighting to accentuate the beauty of the town's architectural treasures. Van der Linden had already begun using his new X7 scanning system to create point clouds for this clients, so he conducted some scans to test feasibility for such applications. For a proof-of-test concept, he chose the Utrecht Gate of the 16th century Naarden Fortress in the Gooi region of the Netherlands. Combining scans from the X7 and photos, he prepared a 3D model of the ornate gate to demonstrate the capability to the client, who was please with the results and excited by prospects for the Franeker project. "I did 125 scans in Franeker over two days," said Van der Linden. "And I followed with 5,000 photos with a digital camera; this took three more days." He delivered the information as a single cloud, registered in the field using Perspective software running on a tablet that also controls the scanner. The scan and images were processed together by the client and an Autodesk 3DS Max model was created for the lighting designers.

"Without scanning, my client would have needed to look for drawings of the buildings, and there are not many of those for such old structures," said Van der Linden. "It would have taken months to measure by hand and total station to build a model for the lighting designers." 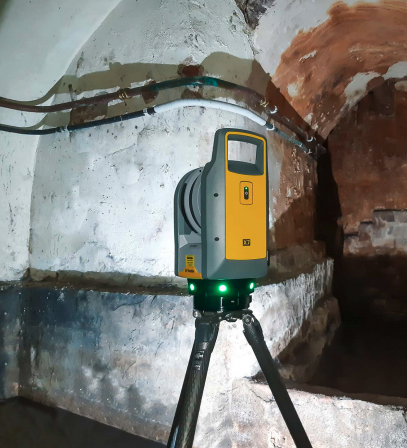 Van der Linden took 4-minute scans at about 20m spacing throughout the historic sector of the town. "This went quickly," said Van der Linden. "The X7 is self-leveling and self-calibrating and each scan was automatically registered to those adjacent in the filed, so I could check both the progress and how well they fit together."  In addition, the sealed scanning head of the X7 was well suited for the rainy conditions Van der Linden encountered on the scheduled scanning days. "I have used other scanners with exposed mirrors, and even a few raindrops might mean I have to wait for the rain to stop, " said Van der Linden.
"With the X7 I could complete the 4-minute scans with no problems in almost any weather except heavy downpours." Van der Linden has since used his Trimble X7 on many such projects. "I just did a firehouse and an old building in Amsterdam, and one client needed a scan of a complex part of a monument so they could design its repair," said Van der Linden. For these projects and Franeker, the points did not need be registered to survey control and the deliverable from Perspective sufficed. But one recent scan of a windmill was round, getting the orientation right proved tricky. For such projects, Van der Linden has invested in spherical scan targets and RealWorks software to handle the registrations. In addition, Van der Linden says he finds the point cloud classification and cleanup tools in RealWorks to be far better than other software he used in the past. Van der Linden's X7 in now his go-to tool for his clients. The scans and workflow are nearly as fast as work he did with his old camera-based system but provide a much more detailed and dimensionally true 3D model.

"One of the key things I like is the easy workflow and automatic registering in the field for the scans I capture." - Paul van der Linden -