Read the article in french >>

To produce a 3D model for future repairs for the tunnel under their historic railway station, the government of Metz, France hired surveyor firm A.L.I.D.A.D.E.S. to capture all the data they would need in less than 48 hours.

In April 2022, the Eurometropole of Metz, France commissioned surveyor firm A.L.I.D.A.D.E.S. to carry out a topographical analysis of the road tunnel passing under the esplanade of the central station of the city, in order to produce a 3D model for future repairs.

In operation since 1908 and built in a neo-Romanesque style, this grandiose railway station building was intended to be a symbol of the power of Emperor William II over Metz and the surrounding region, which was annexed in 1871 by the German Reich and returned to France under the Treaty of Versailles in 1919. 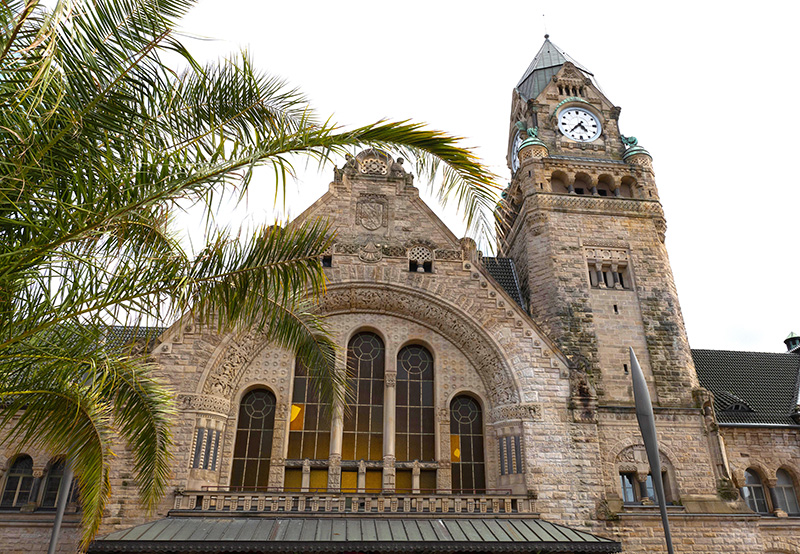 At more than 300 meters, it is still one of the longest train stations in Europe. Classified as a historic monument in 1975, it has been voted several times the most beautiful station in France, in part because of its forecourt is lighted by elegant sunflower lamp posts, created in the early 1990s by the famous designer Philippe Starck, that automatically rotate in the evening to diffuse their light.

In 2020, surveyors Paul Chavant and Julien Pierson created a new firm called A.L.I.D.A.D.E.S., a French acronym standing for surveying, subdivision, implantation, delimitation, monitoring, division, condominiums outline, and 3D scanning. Based in Metz and Thionville in Lorraine, in Strasbourg and Enztheim in Alsace, the firm’s team of 20 specializes in the acquisition, understanding and processing of 3D data. 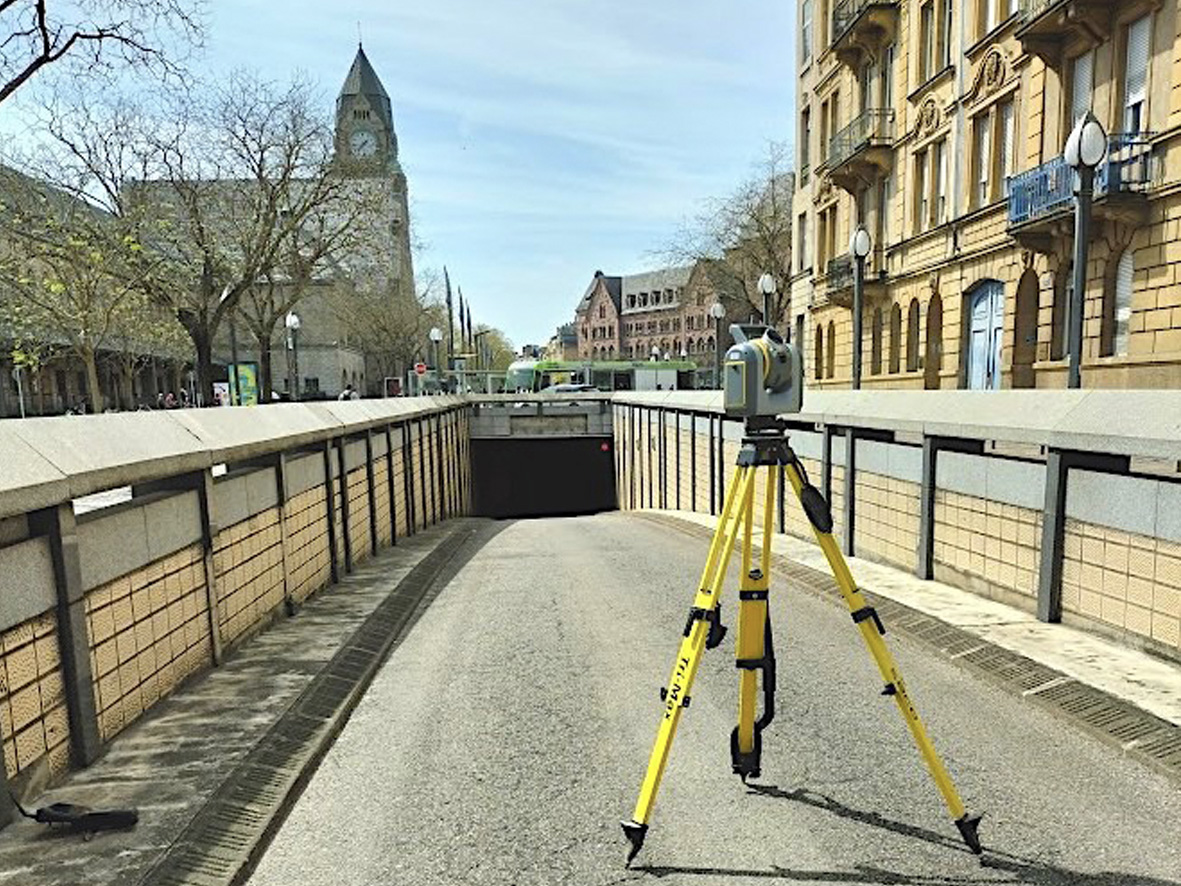 The SX10 scanning total station positioned at the entrance of the underpass © A.L.I.D.A.D.E.S

“The main reason for choosing Trimble, in addition to it being a global brand, is the simplicity of use and configuration of these systems, and the fact that it is very easy to bring together recent and old equipment without too many compatibility concerns,” Pierson said.

Thanks to technologies like frictionless drive, active prism, and video imaging, he believes that Trimble’s topographic stations are the best on the market.

In line with the new technologies of its business, the young company is focused on solutions for precision. “We have been using Trimble technologies for a long time, including in previous work at Geotopo, a Trimble distributor in France,” Pierson said.

With tunnel traffic closed for only 48 hours, A.L.I.D.A.D.E.S. had to work fast to carry out its survey of the 400-meter underground passage, including a 300-meter curve. 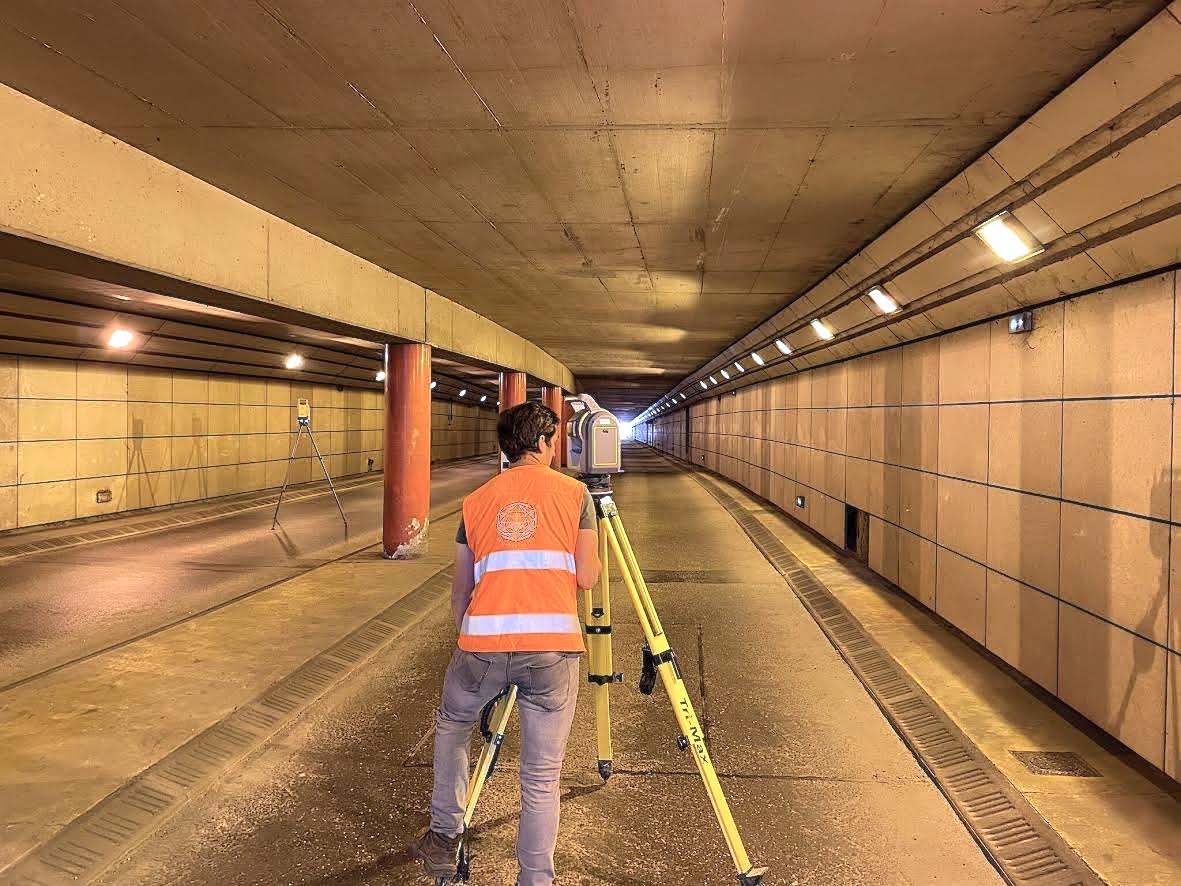 For this mission, Chavant and Pierson were assisted by their young technician, Hugo Mazoye. Another challenge was to understand and perform the tunnel survey with external control points only at the entrance and exit.

“We also had to acquire a precise georeferenced point cloud taking into account linear alteration in the field and in the office” said Pierson. “To meet so many requirements, we quite naturally opted for the combined use of our two Trimble SX10s and our X7 static scanner before using Trimble Business Center.”

A.L.I.D.A.D.E.S. proceeded conventionally via successive surveys on spherical prisms in a georeferenced coordinate system to obtain a faithful image without any problem of control points in the tunnel. “The  SX10 station coupled with the “magic” (in terms of visibility) screen of the TSC7 controller, allowed us to create a global cloud with a station-to-station referencing based on a precision polygonal. This point cloud became our reference for the rest of the study, without us needing to perform subsequent resettings.”

A.L.I.D.A.D.E.S. then chose to densify the point cloud using the Trimble X7. “This scanner allows quality acquisitions to be carried out in a rhythmic manner that’s easy for the operator,” Chavant said.

To facilitate the cloud-to-cloud registration and to obtain a regular frame, the team still set some registration targets within the tunnel. In the end, 11 different positions with the SX10 scanning total stations were carried out and no less than 130 positions with the X7 scanner. The traverse closure of landmark routing was about 2.5 mm, an extremely accurate result.

Back in the office and thanks to the TBC software, A.L.I.D.A.D.E.S. easily calibrated the data from the two point clouds to deliver a dense georeferenced point cloud, as well as a complete topographic plan. 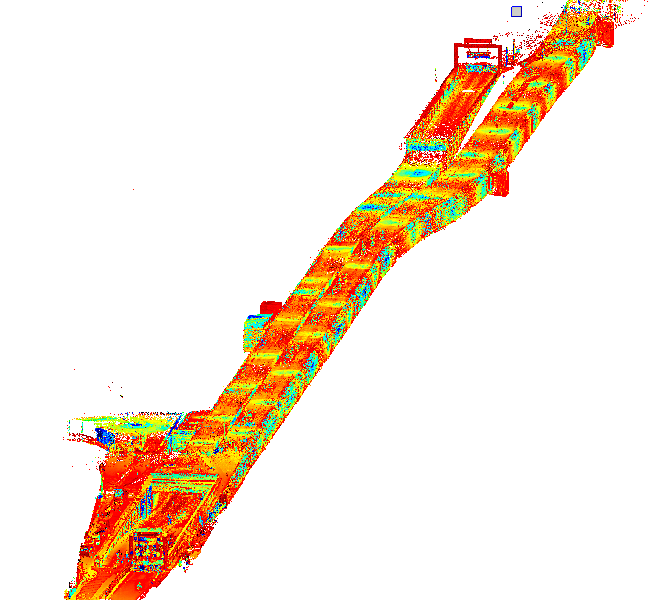 “The main advantage of Trimble scanners is obtaining a complete image of the structure at a given moment that avoids needing to return to the field,” said Chavant.

”Trimble Business Center allows us to process points clouds acquired in a georeferenced GPS coordinate system such as RGF93 CC49 in complete safety while preserving any possible parameters of linear alterations associated with these systems.”

In the end, in addition to a cloud of dense points georeferenced in the RGF93 CC49 system, A.L.I.D.A.D.E.S. also delivered a complete 2D topographic plan of the site, elements which will be integrated into the Eurometropole database for the subsequent production of a 3D model that will be used to plan a future repair of the underpass.

Point cloud merging data from SX10 and X7 scans and used as a basis for precision work © A.L.I.D.A.D.E.S

At the request of Geotopo, an authorized Trimble distributor, the A.L.I.D.A.D.E.S. team recently tested the Trimble X12 3D scanner on a bridge.

Pierson's verdict: “This device is breathtaking in terms of its acquisition quality, its density of points and its disconcerting ease of use. Its performance is up to what we expected for large engineering structures, as well as for small interior surveys.”

He concluded, “The collaboration with Z+F is a smart choice and reinforces the critical analysis of Trimble engineers. With its design, precision, adaptability and live registration on the cloud-to-cloud terrain, it is undoubtedly one of the most successful products of its generation. We can therefore bet that the Trimble X12 3D scanner will very soon become a new benchmark in the market.”