The resulting pre- and post-construction 3D model was critical in helping identify design problems and significant discrepancies in the as-built construction, also providing an as-built of the new exterior to use for future maintenance and operations.

The previous home of the Institute of Geology in Vilnius, Lithuania, was set to be transformed to serve the unique needs of the country's Dignitary Protection Service (DPS) that provides protection for the Heads of State of the Republic of Lithuania, visiting foreign dignitaries, and important public facilities and events.

The building needed to accommodate a range of activities, from weapons training to the storage of sensitive and classified information. The renovation plan included adding a roof solar power plant and a building addition, making adaptations for the needs of people with disabilities, updating offices and meeting rooms, as well as adding a shooting range and secure archives.

As one of the first users of scanning technology in Lithuania, Terra Modus was hired in 2019 to scan the complete interior and exterior of the existing 6,310 square meter structure before construction began, while existing 2D floor plans were used to determine heights and distances for the initial redesign. 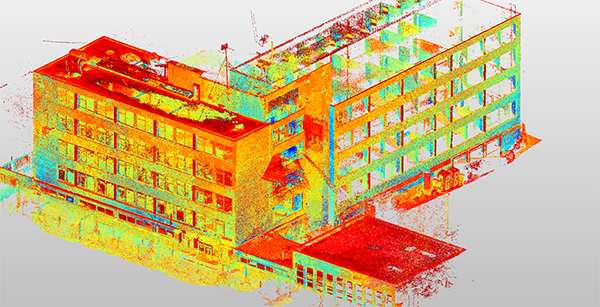 The existing building was scanned before construction using Trimble X7 and TX8 laser scanners; a 3D model was built using the scanned data.

Laser scanning is a fast and highly accurate method of collecting comprehensive data for building interiors and exteriors. The resulting point cloud is used to create a 3D model, useful for identifying potential design problems and exposing discrepancies in as-built construction.

“3D models provide valuable insights throughout the duration of construction projects, from design to build, and help keep construction on time, under budget, and true to form.”

As their first large BIM job, the DPS building represented an opportunity for Terra Modus to perform data collection with a laser scanner rather than traditional surveying, providing exponential time savings on such a large, complex project.

Terra Modus used Trimble® X7 and TX8 laser scanners to scan the outside of the building in the fall of 2020. The TX8 was the primary scanner for the exterior because of its accuracy and range. Since the building was five stories high and covered two blocks, the TX8’s long-range capabilities helped expedite data collection.

“We use Trimble laser scanners because of their accuracy and speed,” said Valauskis. “The vertical compensator on the X7 makes sure every point is leveled, and the TX8 collects very quickly while delivering high-quality data.”

The X7 was used to capture detail on dark and shiny exterior surfaces, made possible by its high sensitivity. Between the two scanners, the complete building exterior was scanned by two people in just six hours. All scanning was accomplished by setting up equipment on sidewalks without interfering with traffic in the busy streets surrounding the construction zone.

Scanning the interior was done one floor at a time as construction progressed. A typical room of 50 square meters was scanned in 10-15 minutes and required 3-4 station setups. Each of the five floors took four hours to scan with the X7 and included putting targets on walls and columns for better registration.

The X7 was employed for the interior because the Trimble Perspective software started registration while onsite, requiring only a quick verification in the office before sending data to the modeling team. In total, time to complete each floor’s model was three days, including data collection.

A Trimble M3 mechanical total station facilitated the transfer of the control network from client-supplied control points to make connection to Terra Modus’ control network. Valauskis explained, “An alternative approach would have been to ask a surveyor to survey a few control points and give them to us, or we could have obtained coordinates with a GPS and matched them to the scans later, but the M3 saved time and gave us peace of mind that our control was good from the start.”

After construction was completed, the entire exterior was re-scanned in early 2022 to create a 3D model as a reference for future maintenance and operations. The 3D model and the registered point cloud were delivered to the customer so they could update their BIM. 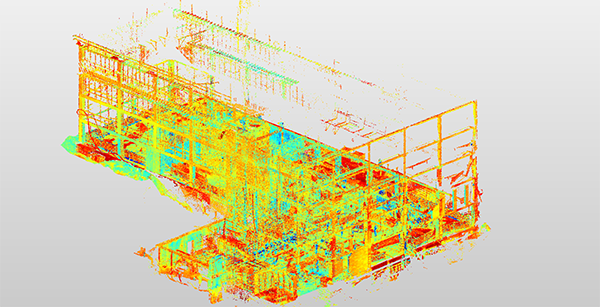 After construction, additional control measurements were taken using laser scanning technology to detect any significant deviations from the design model.

“On the DPS project, our 3D model showed that each floor was 5 cm higher than the design indicated, which had a significant impact on many things, including prefabricated staircases,” said Valauskis. “Using our 3D model and point cloud, designers adjusted everything in the BIM model. It took time, but the problem was solved on the computer and did not need to be dealt with on the construction site.”

Terra Modus was an early adopter of laser scanning, starting in 2007 with small projects like scanning staircases in heritage buildings undergoing refurbishment. They quickly realized that data collection with a laser scanner is faster than traditional surveying, and that time savings adds up, especially on large projects like the DPS building. 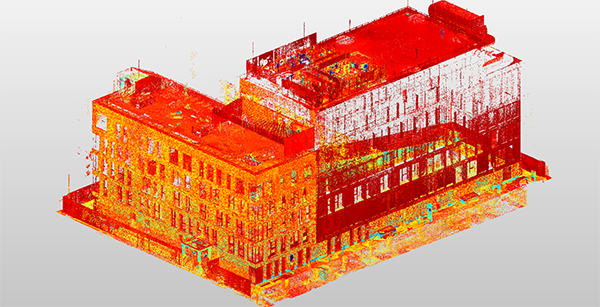 After completion of construction, the building was scanned again, and the final 3D model was transferred to the designers and integrated into the BIM.

In addition, the volume of data is greater with a laser scanner, and there are no data gaps. It takes more setups with a total station to get an equivalent amount of data, and if something is missing it means another trip back to the site. Faster scans also mean less time spent on dangerous construction sites, and less interference with contractors.