A Danish surveying firm had been given daunting technical specifications and logistical constraints for an engineering survey of a vital rail corridor. The decision to deploy a Trimble® MX9 for mobile mapping not only met but exceeded expectations. 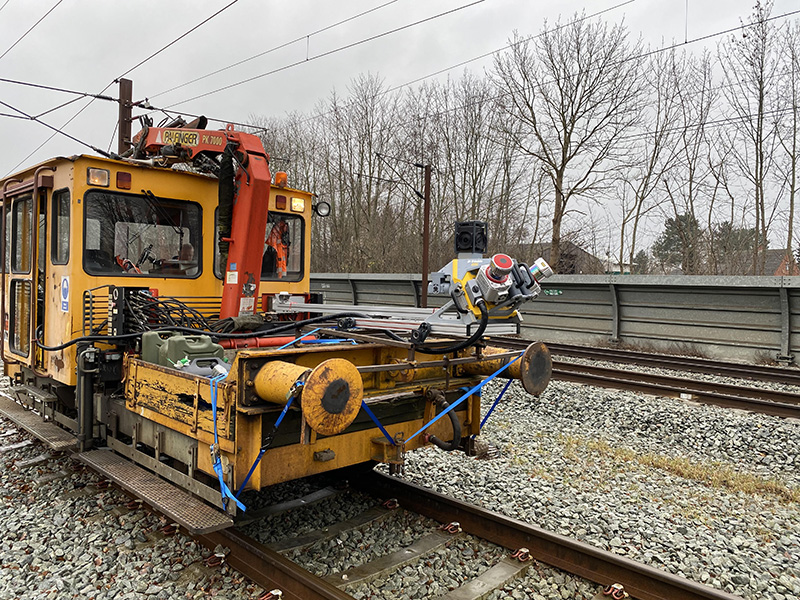 LE34 mounted the MX9 on a rail maintenance lorry for the railway mapping project. The system is controlled by a tablet computer in the lorry cabin.

When Anders Nygaard Møller, engineering survey director with LE34, saw the specifications for the Danish OdenseNyborg railway mapping project, he was initially taken aback. The big three constraints—cost, schedule, and precision—seemed aligned against him. The 70km of rail to be surveyed is one of the most vital transportation corridors in the world. How would he perform the survey without significantly impacting rail traffic while keeping the survey crew out of harm’s way, and deliver 1cm precision on all observed points?

Møller looked towards mobile mapping systems; integrated scanning and imaging instruments that move at road or rail speeds to collect rich imaging and/ or point cloud data. “If we were to meet the precision requirement with mobile mapping, we would need break the 1cm barrier, said Møller. “And as far as we could tell, no one had done before.” Breaking this barrier was not easy. LE34 used a combination of high-precision instruments, rigorous processing and dense survey control to make it possible.

For data acquisition they selected the Trimble MX9 mobile mapping system, taking delivery of one of the first MX9s in Europe. LE34 developed procedures for their new system and began testing. “We first had a smaller project in Copenhagen,” said Møller. “We learned that finding the right driving speed is a matter of a balance—going slow enough to get the density desired and fast enough to minimize the time between control points.” In a mobile mapping system, GNSS and inertial sensors can maintain high precision between control marks, but accuracy can degrade if there are lengthy GNSS outages or the control points are far apart. LE34 tests showed that a speed of 45 to 50km per hour was optimal for the project. 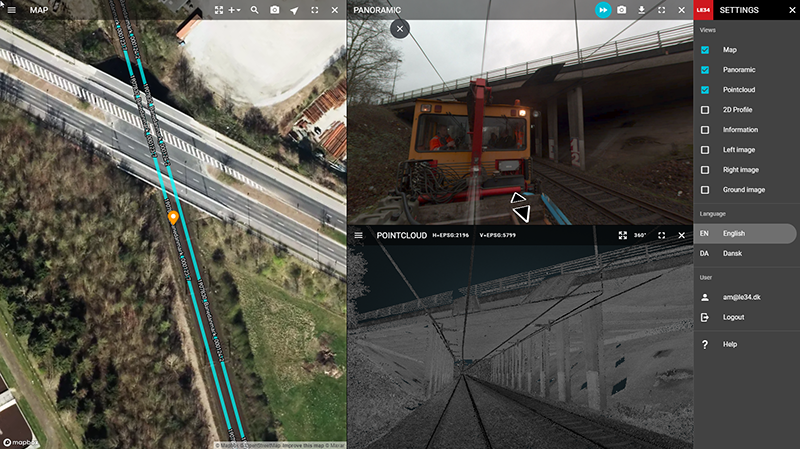 LE34 developed their own web viewer and data access portal for their customers. The Danish rail authority was able to access the full density point cloud data. 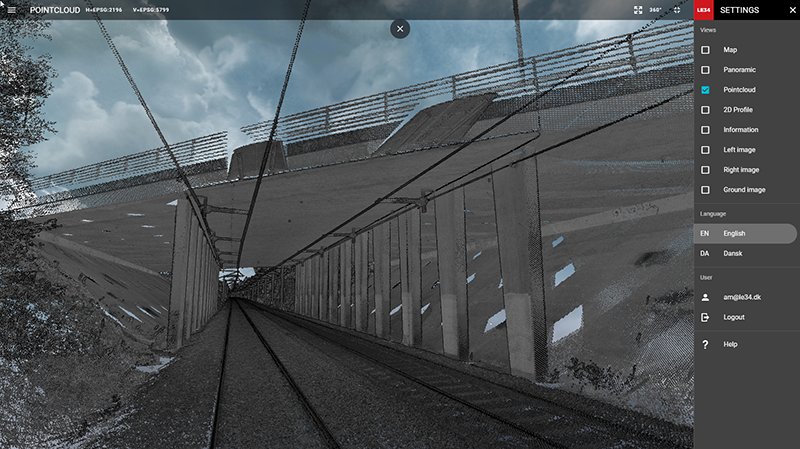 The 70km of dense point cloud was accessible from LE34’s own web portal as tiled data for rapid display. The GUI includes a dynamic map, fore and aft images, and the cleaned-up point cloud with tools to identify features and measure.

LE34 was uniquely poised to attempt to break the 1cm barrier for the Odense-Nyborg rail project. Six years earlier the company had completed a traditional survey for the line that included dense control points. The rail upgrade project was postponed but resurrected this year as rail traffic had increased. The Odense-Nyborg section had become a bottleneck in a vital rail link between Europe and Scandinavia—increasing capacity was an imperative. “The control data from the old survey was still good,” said Møller. “It took two surveyors only a week to verify the control, then we mounted the MX9 on a maintenance lorry and completed the mobile mapping in 4 hours.” LE34 tested different ways to process the inertial data combined with PPK (post-processed kinematic) GNSS by adjusting various parameters in the Applanix POSPac office software. It paid off. “We were very happy to see our results at 7mm,” said Møller. Their client, the Danish rail authority was pleased and— based on the success of LE34’s work—has approved mobile mapping as a standard method for the survey of rail infrastructure 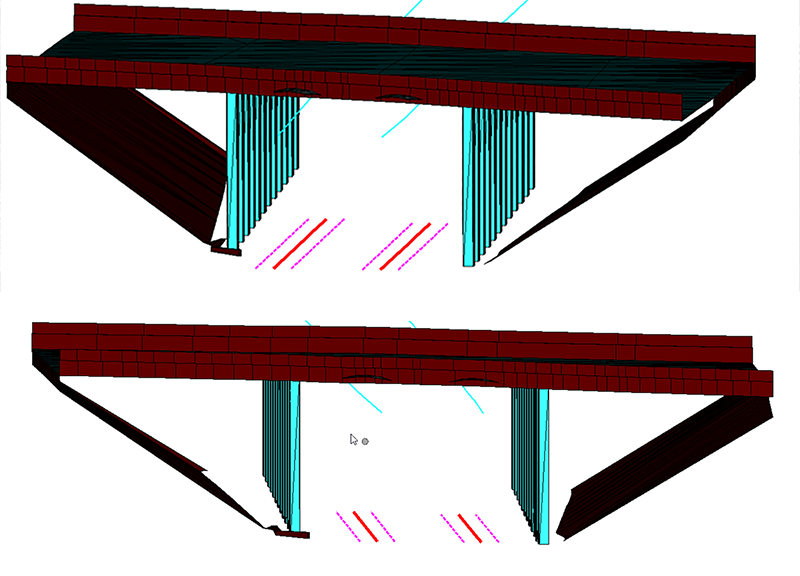 From the dense point cloud data collected by their mobile mapping system, LE-34 created planimetric drawings and 3D solid models for key features like the bridges and crossings to be replaced or updated

Flexibility For the Future

The MX9 provided the flexibility Møller was seeking, from high-precision engineering data to asset mapping. It also accommodates multiple postprocessing options and standard data outputs, as deliverables requested by clients vary. “Sometimes we do extraction in TBC [Trimble Business Center],” said Møller. “But for other clients we can customize output to go to Bentley products, TerraSolid or others.” The experience of LE34 on this major rail project demonstrates clearly that if the conditions are right— dense control, rigorous processing, and high-precision equipment—then sub-centimeter mobile mapping is no longer a barrier. 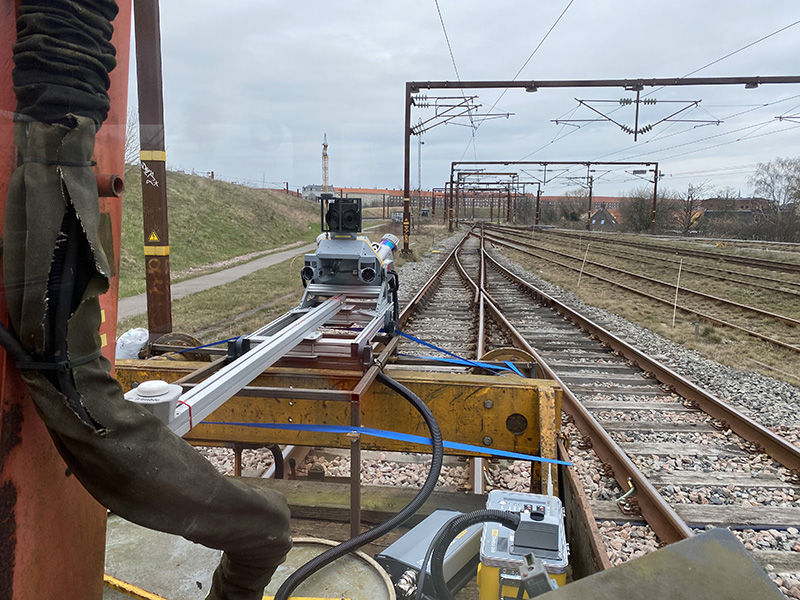 The mobile mapping system was mounted on the front of a rail maintenance lorry. LE34’s tests determined to optimal speed for this mapping project, a function of survey control target spacing, and desired point density, was 45 to 50km per hour. 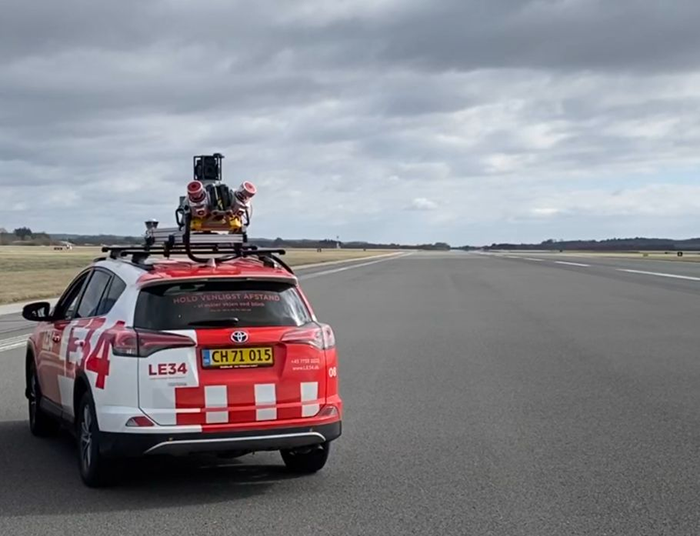 The mobile mapping system is relatively light for such instrument packages, and LE34 has adapted it for mounting on autos for roadway surveys.

"We were very happy to see our results from the Trimble MX9 at 7mm for all observed points.” — Anders Nygaard Møller, engineering survey director, LE34