This blog series is intended for those who would like to understand how to improve the locational accuracy of their field data but are not sure how GPS and correction services work.

The blog below introduces some of the fundamentals of GPS—what GPS and GNSS are, how they work, and the types of errors that can impact GPS and lead to reduced accuracy.

Subsequent blog posts will dive into some of the details of what GPS corrections are and how they can be used to improve GPS accuracy, the various types of corrections services, the pros and cons of the different methods, and which method is best suited for the field data you are capturing and the environment you are working in.

The Global Positioning System (GPS) was developed by the US Department of Defense as a worldwide navigation resource for military and civilian use. It was originally based on a system, or constellation, of 24 satellites orbiting the earth acting as reference points from which GPS receivers on the ground can use to compute their position. Today GPS is joined by other satellite constellations including GLONASS, Galileo, and BeiDou, greatly expanding the number of positioning satellites in orbit. Collectively these constellations are referred to as GNSS—Global Navigation Satellite Systems. For the rest of this blog series we will use the term GNSS in place of GPS as all modern Trimble receivers are capable of tracking multiple constellations.

GNSS receivers work by listening to a series of specially coded messages transmitted by each satellite; a GNSS receiver on the ground can calculate how long it took the signal to get from the satellite to its own antenna. Then, to calculate the distance from the antenna to the satellite, the receiver multiplies that travel time by the speed of light. A GNSS receiver is able to make this calculation with multiple satellites simultaneously. If the GNSS receiver is receiving messages from at least four satellites, it can then triangulate its location anywhere on the surface of the earth. 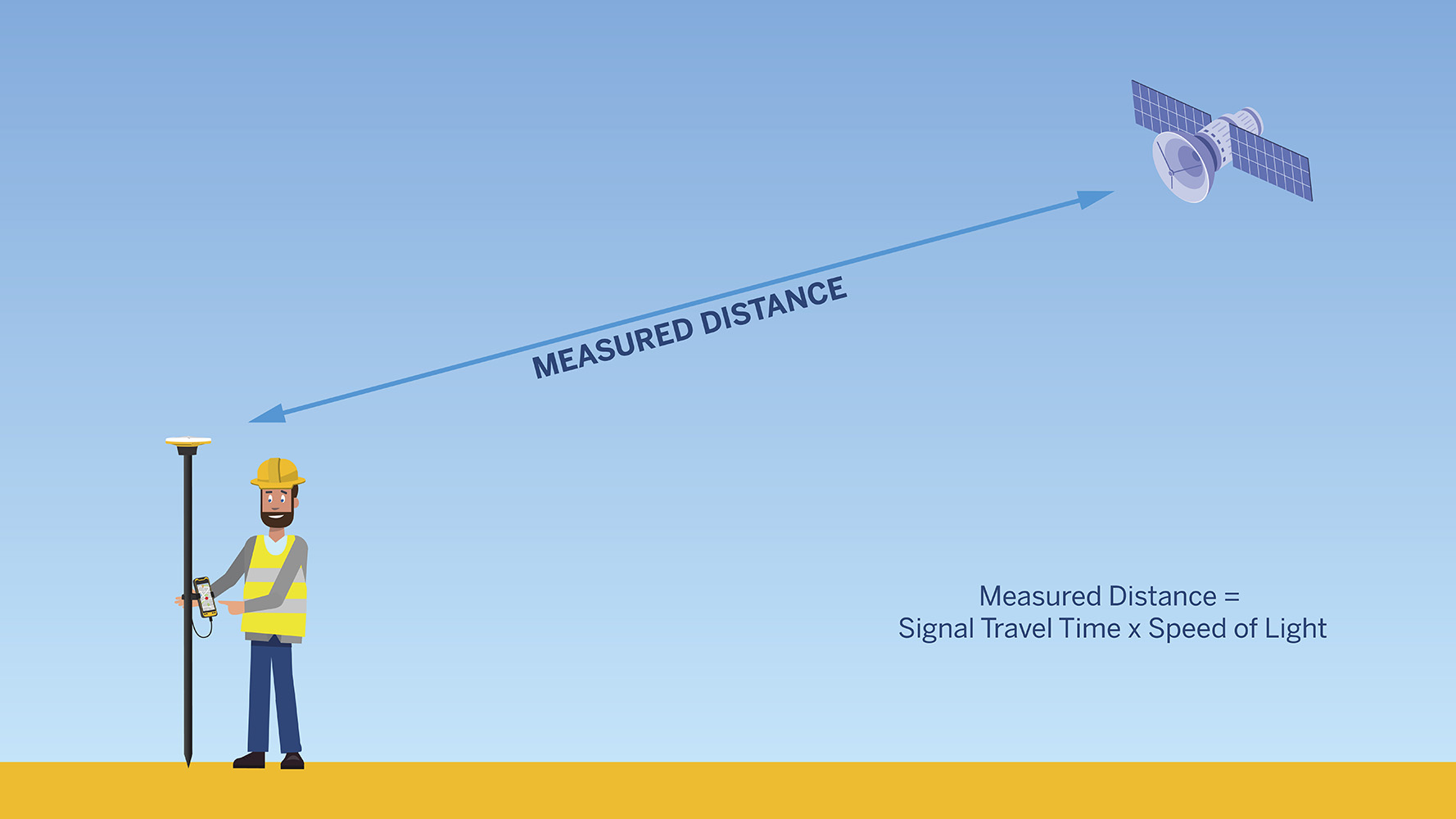 GNSS receivers work by calculating the distance between the receiver antenna and the satellite. By tracking signals from at least four satellites, the receiver can calculate its location anywhere on Earth

What causes errors in GNSS location?

GNSS receivers need to be receiving messages, or tracking, from at least four different satellites in order to calculate a location, but this location will not be perfectly accurate. There are various sources of error that can reduce the accuracy of the calculated location.

You won’t always be able to maintain a clear view of the sky when capturing data in the field, especially when working in environments with trees and buildings. If you find yourself in an environment that can’t see the sky at all, like a tunnel, you might need to look for a different positioning solution!

There are four main sources of error that can impact the location calculated by the receiver:

The timing of when a message is broadcast from a satellite is critical to GNSS, and so GNSS satellites are equipped with very accurate atomic clocks. Unfortunately these clocks are not perfect and slight inaccuracies in the timing of messages broadcast from the satellite can lead to errors in the location calculated at the receiver. Also the satellite’s position in space is important, but satellites can drift slightly out of their predicted orbit. This can introduce errors in the receiver when it calculates the distance between the antenna and satellite.

In the real world, light slows down, depending on what it is traveling through. As a GNSS signal travels to the surface of the earth, it gets delayed a little, and because the calculation of distance assumes the signals travel at a constant speed, this delay leads to a miscalculation of the satellite’s distance, which in turn creates an error in location.

When the signal arrives at the surface of the earth, it can reflect off obstructions such as buildings and trees, before making it to the antenna. The signal arrives at the antenna by ‘multiple paths’ which is why this type of error is called multipath error. The antenna receives the direct signal first because the direct route is always fastest, and then the reflected signals arrive later, interfering with the direct signal and giving ‘noisy’ results. Trimble antennas are designed to reduce multipath interference but it is not possible to eliminate it completely. 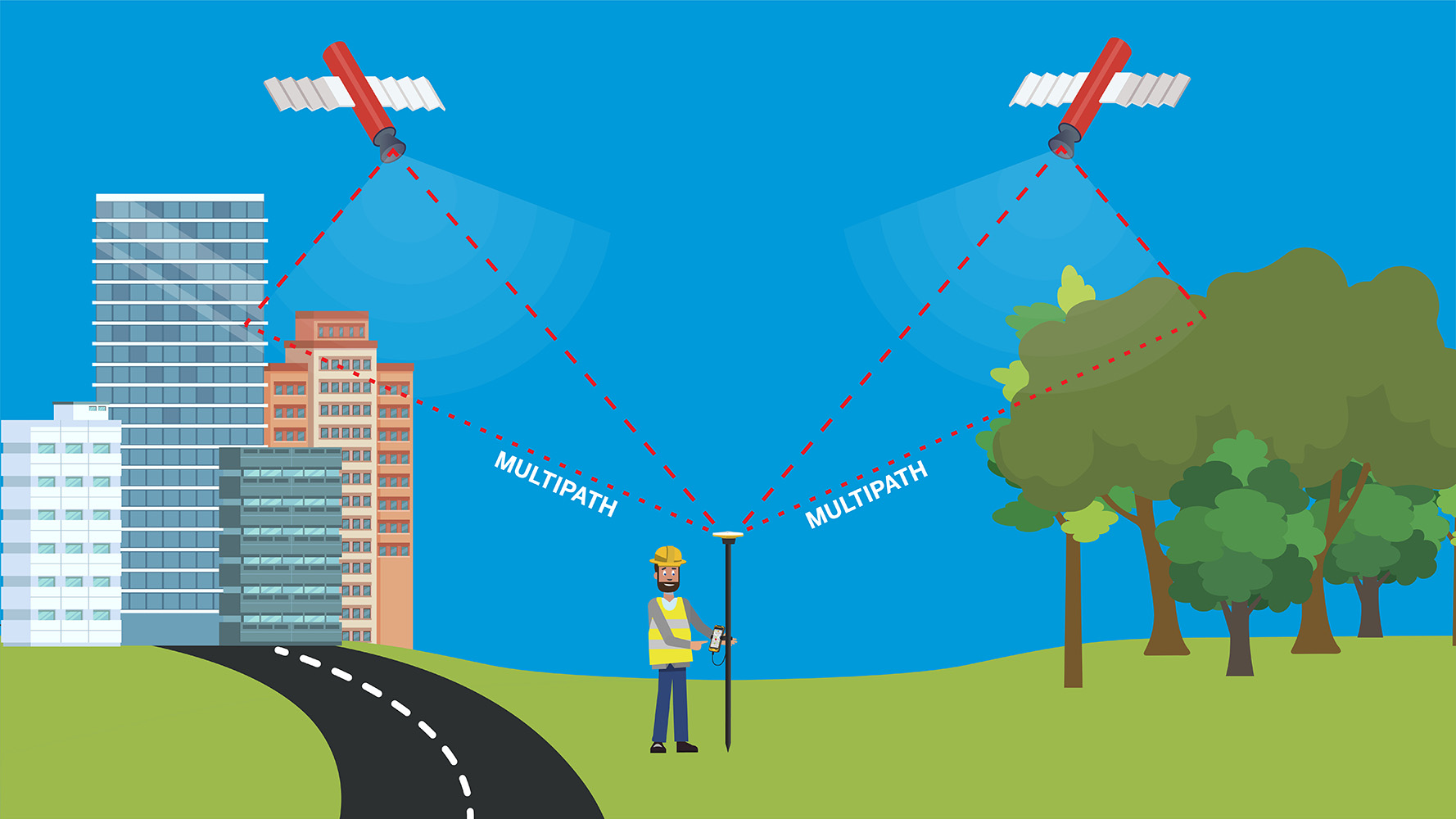 A GNSS receiver needs signals from at least four satellites to establish its location, and each of these signals has its own set of errors as described above. The satellite clocks might be inaccurate, or the satellites might not be in their predicted orbits. As the signals travel down through the atmosphere, they are deflected and delayed because the earth’s atmosphere is not a vacuum. The signals are bounced around when they meet local obstructions (creating multipath error) before finally reaching the receiver

Fortunately, satellites are so far out in space that distances on earth are small by comparison. If multiple GNSS receivers are within a few hundred kilometers of each other, the signals that reach them will have traveled through virtually the same piece of atmosphere, and will have virtually the same delays. This means receivers will typically be impacted by the same errors, excluding multipath and receiver errors. So, one receiver can measure the errors and provide corrections for these errors to the other. This process of eliminating errors is called GNSS corrections.