“Why does my data look that way?”

Now that we’ve covered the basics of coordinate systems and geodetic topics relevant to GIS data collection, we can start to look at common configuration problems and how they manifest themselves in your data.

But first, we need to cover one last educational topic, and it is perhaps the most important one. That is, how do we achieve high accuracy in GNSS data collection and what are the important geodetic considerations in that process?

The most common way of achieving high accuracy is through a process called differential correction. In this process the difference between the measured and the true distance between a known location (a base station) and a satellite is calculated and then applied to GNSS measurements as a “correction”. Corrections can be done as soon as measurements are made (i.e. real-time) or after measurements are collected (i.e. post-processing). 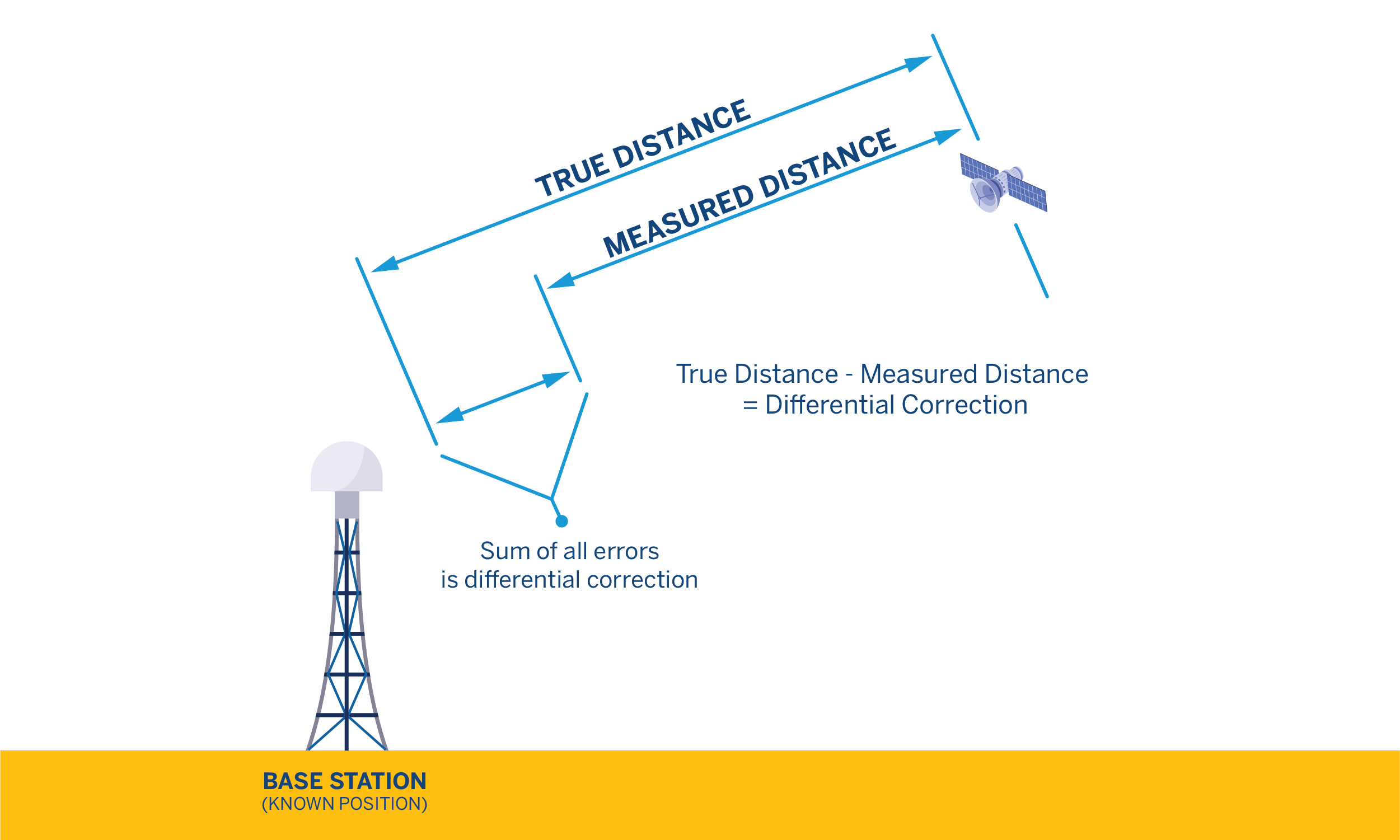 In general, correction works because most error sources (e.g. atmospheric) are similar across wide areas. Differential correction can be applied to the mobile GNSS receiver measurements to eliminate most errors.

It is typical for correction service base station infrastructure to be maintained by surveyors or other geodetic agencies. As such, the reference position and coordinate system information is generally kept current with the latest datums and realizations. This is often in contrast to GIS systems-of-record which will utilize the same coordinate system over a longer period of time. For example, although the most current realization of the “standard” US coordinate system is NAD 1983 (2011), the majority of customer datasets we see are still using the older NAD 1983 (CORS96) or even the original NAD 1983 (1986). In almost any GNSS data collection project, datum transformations will come into play at one or more points in the workflow. The proper identification and configuration of these transformations is one of the biggest sources of error and user frustration.

Let’s take a look at some of these configuration challenges in more detail.

Challenge 1: How do I know that what I’m comparing my data to is a valid source of truth?

When evaluating the quality (accuracy) of the data you collect, you’ll need to know what you’re comparing it to. Although the GNSS receiver may tell you it is accurate to within 1 cm, that’s of little use if you can’t validate the results against something in the real world. Ideally, you’ll be able to collect some test data over known “benchmarks” or “control points” for which you know the accurate location in an “official” reference frame. These are often maintained by regional or national geodetic agencies. If you are comparing against existing data you have, you’ll want to verify that the existing data is in fact accurate; knowing its lineage is important (how and when it was collected or digitized, what is the original coordinate system, etc.). It’s not uncommon for historical GIS data to lack positional accuracy and instead be drawn in a way to look good at a certain zoom scale.

One other consideration needs to be made when using reference data from a local survey, commonly known as a “site calibration”. In typical survey workflows, data is adjusted to optimize accuracy relative to a project or site (it may still use a standard coordinate system definition). As such, the reference frame is specific to the site and may not exactly match a “published” reference frame that would be valid across a wide region. Most GIS software has very limited tools for working with adjusted coordinate systems like this although there are generally paths to work with custom transformations that could be provided by the surveyor.

Challenge 2: My field-collected data looks correct by itself, but is nowhere near to my source of truth. They barely show up on the same map! In this case, when you bring your field-collected data into your GIS, it either shows up in a completely different location or maybe it doesn’t come in at all. This can happen more commonly when working with data formats that don’t carry the coordinate system information along with them (e.g. CSV exports) and usually reflects some sort of misconfiguration of one of the basics:

Challenge 3: My field-collected data looks close to my source of truth but is shifted by a constant amount (e.g. an offset).

This is perhaps the most common challenge in GNSS data collection projects when it comes to integrating field-collected data into a GIS system-of-record. Customers will frequently report that their data looks shifted by half a meter up to several meters. Far and away the most common cause is a misconfigured datum transformation - either missing, incorrect, or applied twice. As we alluded to earlier, datum transformations are required any time we have to work between reference frames or coordinate systems that use different datums. In a typical high-accuracy GNSS data collection workflow there are potentially four different coordinate systems in use:

Both the field and office software will generally provide configuration options for datum transformations between each of these as required by the workflow. In most cases, you’ll want to do some field validation of the configuration (using known control points as described earlier) prior to starting a production-level data collection project.

There are several finer points to be aware of:

Challenge 4: My field-collected data is very close to my source of truth, but not within the accuracy estimates of what the GNSS receiver is telling me.

In this case, you’ve collected good data, your accuracy estimates either in real-time or after post-processing are within a few centimeters, but you’re still 10~20 centimeters from your control points. You’ve already confirmed you’re using the best available datum transformations but this is as close as you can get. There can be various reasons for this - some of which are a result of configuration issues and others of which are just limitations. Here are the most common ones:

In the next part of this blog series, we’ll discuss some exciting new improvements in our Trimble GIS software workflows to significantly improve coordinate system workflows and help translate accuracy of the GNSS receiver to accuracy of the overall data collection workflow.

Continue to Part 3: What is Trimble doing to solve these problems?